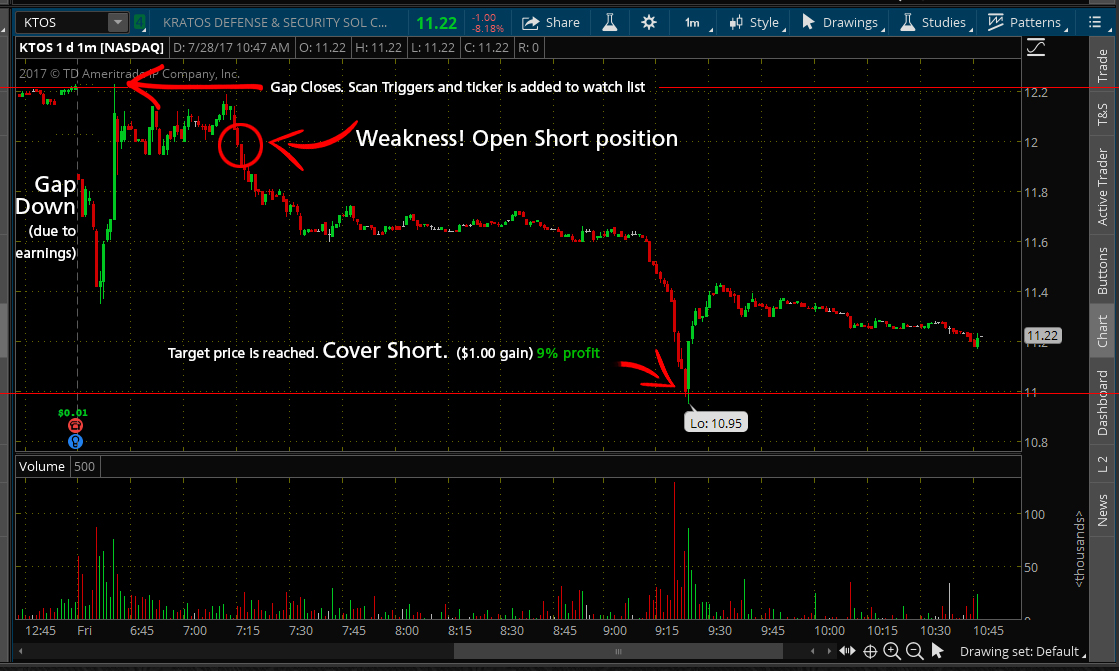 The Gap Down Close scan is a scan I run in my ThinkOrSwim side bar along with several other scans. If the scan “triggers” for any stocks trading in the US stock market, the ticker symbol will be automatically added to the “Gap Down Close” watch list. I have that watch list linked to one of the charts displaying in my ThinkOrSwim platform layout. I can then click on a stock in the watch list and it will show the chart for that stock in the chart window that it is linked to.

This scan filters out low float/low volume stocks. This keeps the amount of “triggered” stocks down, and also eliminates stocks that are very hard to get in and out of due to lack of liquidity. What this scan is searching for are stock that have gapped down and then closed the gap on a daily chart. This is usually due to overnight news that has come out either at the end of the previous day or while the market was closed. A gap down is when the price of a stocks opens lower than the closing price of the previous day. The scan is obviously looking for a significantly lower opening price. Many stocks are not going to open at the exact price that they close at on the previous day. The gap has to be at least 1.5% for it  to be statistically relevant. As mentioned previously, a significant gap-up or gap-down will usually occur due to an earnings report coming out after, or before, the opening bell. Or, due to compelling news that has come out while the market was closed (either after hours, or pre-market)

This scan is used to trigger stocks and create a watch list of “in-play” stocks. Once a ticker is on the watch list you will need to look at the chart and determine why it’s moving, where the price is it relation to its 52 week highs/lows, and many other factors, including what the overall market is doing. This scan trigger is NOT a signal to buy or short the stock… If only it were that easy. This watch list just gives you a sub-set of stocks to focus on, that are in-play for the day that they trigger.

A gap down tells you that many traders decided to get out of their position in the after hours session, or in the pre-market session. The volume when the market is closed is extremely lower than during regular market hours therefore relatively small buy or sell orders can create wild swings in price. A gap down is not only caused by traders selling in after hours sessions, but also by a pent-up demand to sell once the market opens.  If the “Market Makers” (which is now actually just a computer program) “sees” a large volume of sell orders, it will lower the price to try to create buyers for those shares (basic principles of supply and demand).

This scan is actually one of my favorite scans. I have used it to make many highly profitable trades. As with all the ThinkOrSwim scans on this website, there is a lot of discretion involved on whether to take the trade, and in which direction. These are not auto-trading (green light – red light) scans, where the scan triggers and you automatically buy or sell.  You need to watch the scan trigger many times, over many weeks, determine what caused the trigger, and then determine if there is a pattern to what the stock price does after the trigger most of the time. Of course it’s not going to the do same thing every time. But if you see a pattern in the stock price that happens 60%, 70%, 80% of the time, then you have an edge. Also, it is important to look at other factors, such as what caused the gap down and what type of stock this is (Is it highly traded? Is it a volatile stock? Is it highly shorted? Is it held by a lot of insiders/institutions/funds? etc, etc).

The way I will often trade this scan: I first determine the reason for the gap down. Secondly, I will figure out why I think buyers stepped in to close the gap. I need to determine if the gap close was caused by funds stepping in to support the stock and protect their larger long term position, and in the process squeeze shorts into covering their position. If this is the case, once the gap is closed, often the number of shorts looking to cover will eventually run out, and the buy orders also dry up. If the reason for the gap down is still valid, the stock will start to fall again. I will SHORT only after I start to see weakness with volume.  If I see continued weakness and selling, I will often be able to hold the short all the way down to where it opened or below.

The image at the top of this article shows an example of a trade set-up using this scan. KTOS gapped down due to earnings. I determined that the earning were terrible and there was no real reason for the gap close. Once I saw some weakness, I opened a short position.  My target price was $11. My stop out price was 12.21 (back to previous days close).  This gave me over a 1:4 risk/reward ratio.  This is important! This means I can be wrong on 75% of my trades and still break even! Once the PPS hit $11, I closed the position and made $1/per share profit (9% gain). I was short 1000 shares and made approximately $1000 profit in just over 2 hours. $12,000 may seem like a large trade, but I was actually only risking $210 due to my tight stop.  This was in fact a 1/2 size position for me since I didn’t think I had a huge edge on this trade and was not extremely confident in it. Usually when I take a full size position, I will scale out the close. closing 1/2 at one target price and the other 1/2 at a lower target price. It happened to bounce off of my target price, which doesn’t happen often (I got lucky), but it did fade back down below $11 later in the day, and I would have been able to close the 1/2 half of my position at a lower price if I were trading a full position.

After this scan triggers, I will look at a number of factors to determine if there is a trade to take where I believe I have an edge. If I don’t believe I have an edge I will not take the trade. Never take a trade out of boredom or just following someone else into a trade. These are the things I look at after the scan triggers to determine if (a) there is a trade there and (b) if its a LONG of a SHORT:

Or just copy and paste this link into your ThinkOrSwim application:
http://tos.mx/dFkQ6K

What is a ThinkOrSwim Study Set and how to install one 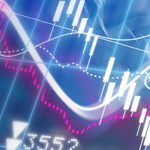 About The Stocks Reporter

The Stocks Reporter is your source for Day Trade and Swing Trade Setups, Finding stocks that are “in-play”, breaking market news, free ThinkOrSwim filters & studies, Market analysis opinion articles, Short sell reports and earnings reports. All content on TheStocksReport.com is for educational purposes only. TheStocksreport.com and its staff are not registered investment advisors. Do your own research. Do not trade based on any information contained on this website.

All content on TheStocksReport.com is for educational purposes only. TheStocksreport.com and its staff are not registered investment advisors. Do your own research. Do not trade based on any information contained on this website.